Each year the Historic Preservation Committee of the Brown County Historical Society presents awards to businesses, organizations and individuals for their efforts to preserve, restore, and adapt for reuse, vintage and historic buildings in Brown County. These awards are presented at the Society’s annual meeting each February.

The following is a listing of our most recent honorees, the 2012 recipients of the BCHS Historic Preservation Awards:

The vision of the Sinsinawa Dominican Sisters of the Catholic Church (based in Benton, Wisconsin) is “to commit ourselves in partnership with others to seek and foster right relationships among all of God’s people and with the Earth that sustains us”. In the mid-1980s, Sr. Caroline Sullivan, born in Scotland and raised in England, was a pastoral assistant at a local parish but was searching for a mission more fulfilling of the Order’s vision. In 1987, with a financial grant from a generous benefactor, she purchased a 12 acre farmstead in rural Brown County and founded The Bridge-Between Retreat Center. Space was created in the 1909 farmhouse for offices, a library, meeting space, and a dining room. Beds and sleeping rooms were built inside the 1890 granary and masonry silo for guest housing. In addition to housing the Center’s critters, the barn is used for gathering and singing, earning the label “The Belgian Cathedral”. The organic garden serves to reconnect people to the earth and bridge soul with soil, by teaching community farming, sustainability, recycling, and living simply. For 25 years, the Bridge-Between has used this quaint, preserved farmstead setting to offer workshops, seminars, and contemplative retreats for groups and individuals of all faiths and beliefs. 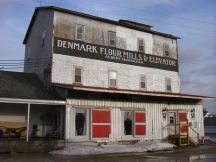 In Molly Johnson’s life, one opportunity seems to lead to another. A high school class trip to Chicago’s American Academy of Art so impressed her that she decided to continue her education there. Not long after, a fellow student introduced her to her future husband Brian. After graduation and marriage, she worked in art departments and studios in the Chicago area, but as the size of their family grew, so did the desire to return to the Green Bay area. In 1996, they purchased a house in Denmark, which happened to be next door to the Feed Mill, and as they later found out, was the former mill owner’s residence. Over the next few years, they found charm in the old mill building. In 2008, when it was learned that the mill would be closing, the Johnsons moved fast and, before it even came on the market, purchased the building for conversion into an art studio. Dreams soon met with reality, however, as items to be addressed included lead paint surfaces, a century’s worth of grain dust, and a swarming colony of rats feasting in the basement. The old grain elevator, mill equipment, and huge storage bins were removed, and the exterior metal siding was repaired, including restoration of the original painted signage. Back in 2005, after working as a freelance artist and teaching art at an elementary school, Molly decided to continue her education at the Academy of Fine Art in Kewaunee. In 2011, as the oversized building was being readied for the studio, it was learned that this same Kewaunee Academy was coming up for sale. In March 2012, the mill building officially became home not only to her new studio, but also her new Academy of Fine Art. The only one of its kind in Wisconsin, the Academy, which has a 2-1/2 year curriculum with 8 teachers and up to 16 students, is now housed in a one-of-a kind building that is the pride of Denmark.

In 1975, Fort Howard Elementary School teacher Chuck Hatfield was looking for a class project to commemorate the upcoming Bicentennial celebration. Since the school was located on land formerly occupied by its namesake, the military Fort Howard, it was deemed appropriate that the project should teach the traditions and history of early American days. It was decided that the construction and interpretation of a frontier log cabin as a summer project would allow the students and community to learn not only building trades, but also culture in the form of crafts, gardening, music, and stories. With an army of school children doing much of the work (including petitioning the city for building code variances), the finished project was dedicated with a cabin warming on July 17, 1975. The soundly-constructed cabin survived well beyond the Bicentennial, but in subsequent years, as this class of students moved on and Mr. Hatfield retired, the mission of the cabin began to fade, and the elements took its toll on the structure. By 2012, with rotting logs and a leaking roof, the cabin was becoming unsafe, and the School District was considering its options, either repair, replace, or demolish. Once again, the Fort Howard community rose to the occasion. The development of a Facebook page enabled students, alumni, and neighbors to voice why the cabin still was important to the school and the neighborhood. Once in-kind and monetary support began to roll in, the School District was reassured that restoration was the right path. Beginning in August 2012, James Hayward, with help from Mr. Hatfield and other volunteers, dismantled the cabin, constructed a new floor slab, repaired the fireplace and chimney, and rebuilt the cabin (using new logs where necessary), topped off with a new wood shingle roof. School and neighborhood children enjoyed watching the work and asking questions, and even pitched in on occasion, reminiscent of the children’s army of 1975. The restored cabin once again stands as a symbol of the school and neighborhood, and a teaching tool to explore our frontier history.